← more from
New Dawn Records
Get fresh music recommendations delivered to your inbox every Friday. 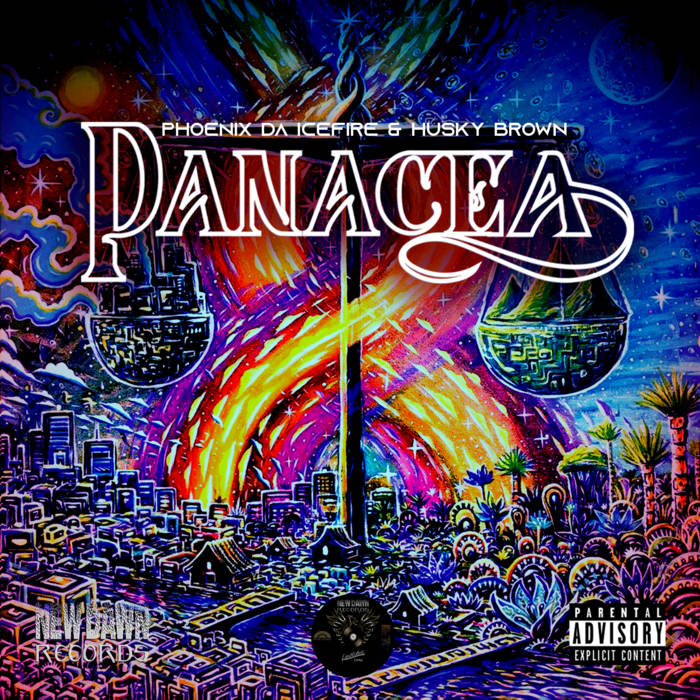 Nominated for "Best Independent Album" at the UK A.I.M. Awards 2020, "Panacea" by London rapper & producer duo Phoenix da Icefire and Husky Brown is one of the most creative and relevant albums for these turbulent times while setting a new standard and fresh perspective for rap music in the process.

Breaking from formulaic convention, the concept is both as abstract as it is grounded in reality, an invitation to join them on a kaleidoscopic journey through the modern human experience.

Formerly of the Midlands, producer and ex street artist Husky may have swapped disciplines but still conjures up vivid imagery through epic and diverse soundscapes. Fusing the sounds of the UK’s inner city through the decades, the potent cocktail of hip hop, electronica, dub, reggae, soul and r&b is reminiscent of FSOL in their prime fuelled with shades of Goldie, Vibronics and Massive Attack.

Further ingredients provide a concoction with hints of Schifrin, Pete Rock and Sly culminating in a dynamic and impressively coherent backdrop for Phoenix da Icefire to depict his visions of reconciling the chaos.

As a member of the highly rated Triple Darkness crew, his reputation as one of the most gifted lyricists from the UK hip hop scene grew exponentially both at home and abroad. With a number of solo albums, mixtapes and work with luminaries including Cormega under his belt, his supporting role for New York’s The Doppelgangaz at the Camden Assembly in 2019 spawned the new partnership with Husky in attendance.

Describing the new album as “the most truthful piece of music I’ve done to date”, Phoenix sets his existential sights on the pressing issues currently facing corners of society and the global community at large. Addressed in isolation, they are woven together in a tapestry portraying symptoms of parallel origins while offering a panacea for the causal nexus.

Amidst the frenzy of electronica, “The Humans are Coming” pens a letter of contrition to the mythological Gaia for the damage done to her realm, while the Caribbean flavours of “Judgement Day” provides the heart beat behind the bars shining a light on the Windrush scandal. “Sins of Gaia” continues the theme, the inner conflict between rage and calm dignity in the face of authoritative prejudice and intolerance.

Electing higher paths while surrounded by maelstroms resonates through the hip hop of “Dark Rainbow Light” the soulful “Don’t Doubt Yourself” and the vibrancy of “Life is Magic”, but in the case of Phoenix, this is more than just lip service. His “Sovereign Comics” series which combine positive and educational storylines with inspirational characters has led to partnerships with local schools, while his writing and creative industry workshops encourage social change by providing opportunities for those too often neglected.

The symbiosis with Husky is further apparent given his own artwork donations to children’s charities and the “Schools for Schools” initiative.

For their groundbreaking debut joint release, the pair have hard wired into society’s mainframe. The empathy for mental health issues displayed in the poignantly infectious “Travelling Buddy” is still underpinned by the album’s narrative of hope, alternatively characterized through the slick r&b floor filler “Seasons of You”. The dexterity of wordplay, metaphors and rhyme schemes are present throughout, epitomized by the neck breaking hip hop of “Mr Shine” and “Cosmic Soul”. The ancient and futuristic symbolism gives Phoenix the latitude to drill down to the core of an existence many will recognize amplified by Husky’s cross cultural soundtrack.

An extraordinary and multidimensional album, but at its heart the essence of hip hop....rhymes, beats and life.

London rapper, presenter on The Floor and owner of Sovereign Comics working with local and national community projects to promote social change and provide greater opportunities for those from minority and deprived backgrounds.

Solo artist and member of the group Triple Darkness.

Nominated in the category "Best Independent Album" at the AIM Awards 2020 for 'Panacea'.

Creativity is everything ... more

Bandcamp Daily  your guide to the world of Bandcamp